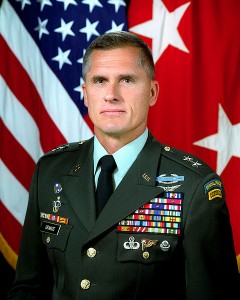 Today, Grange sits on the Board of Directors of the Society of the First Infantry Division, Pharmaceutical Product Development, the Vietnam Veterans Memorial Corporate Council, and the Eshelman Foundation. General Grange is chief executive officer of Pharmaceutical Development, Inc., located in Wilmington, NC. Grange served for 10 years as COO and CEO of McCormick Foundation based in Chicago after 30 years of service in the U.S. Army, with his final command as the Commanding General of the First Infantry Division, known as the “Big Red One.” In that position, he served in Germany, Bosnia, Macedonia, and Kosovo. Frank Gren is a trusted advisor to the highest levels of federal and state governments, investment banks, and the trial bar regarding issues ranging from national security to esoteric financing.

Mr. Gren has previously served in the US Navy as an aviator, Head of Nominations and Appointments for the Naval Academy, and Congress/Senate Liaison.

Mr. Gren is a graduate of the U.S. Naval Academy and the Georgia Institute of Technology. He has served on the board or committees of numerous corporate, professional and civic organizations ranging from the U.S. Naval Institute to the Harvard Fogg Museum.